Now that’s a funny thing for a priest to be carrying. Her brows rose slightly at their quick jump to defense. “I wasn’t asking about that. But I take it you got a lot of comments about it?” She inquired while keeping attention to her surroundings. It’s not like she can criticize if she could, considering the potential threat she can possess. The sound of gunfire from the back drew her attention there where she would see the slaver getting shot by Keme. Keme’s regard for the dead was a bit concerning but she wasn’t going to press on that on the time being. Focusing on making sure that the pilgrims are faring well in this stressful moment. She knew all too well the anxiety that comes with traumatic events. 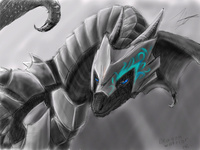 Chask gave a slight nod in regardless to her question, "Yes, it usually is the first question when people notice it. People aren't quite used to Ialao priests carrying weapons, as we are usually on the side of pacifism. Me and my brother are an exception, so we often must explain ourselves. I do not mind it. Our exception is the reason we were sent on this mission by the High Greenspeaker after all. The lands of the Artodeme are dangerous to outsiders. We are a backup plan in the case that you were separated from us somehow. The High Greenspeaker is quite careful about preserving lives." Keme simply gave a nod of agreement, his eyes still focused on the door. He certainly seemed a good deal more cold than Chask, who seemed a bit saddened by the corpse, while Keme remained dead set on the task of watching for any more. Meanwhile, the pilgrims either grew more panicked at the concept of the slavers being able to reach them, and so started moving towards the back of the vehicle to get away from the door, or seemed to actually get more calm once it was revealed that it seemed there were armed protectors aboard. A few even started whispering things like "undercover guards", and they managed to settle down a bit more in their seat, thinking there were perhaps even more members of the caravan secretly armed with weapons.

Still, fortunately for everyone, Keme's guess about the slaver being a straggler held true, and no more came. Instead, the next ones to arrive were the guards, led by one of the Power Guards. His weapon was kept behind him, hidden from sight. The reason for why is that if one looked carefully, they'd see his mighty sword had blood on it, and he likely was attempting to avoid further panic by not showing a bloodied weapon. One guard spoke out, "Is everyone alright? Seems one got past, but that was handled. Guess we're lucky some of you had your own protection." That was said in regards to Keme, who was now holstering his weapon, soon followed by his brother.

’So they are relying on me to protect them’ She thought you herself in light of that information. Not that she was offended or anything. They did need a way to protect themselves if they were ever separated from her. The arrival of the Power Guard pulls her out of her thoughts. Giving a nod of assurance with a smile that she was fine before going back to comfort those who were still suffering from anxiety. Rubbing their backs as she recites verses to ease their mind. When people seemed to have calmed down enough she went back to sit in her seat. Taking a breath to settle her own nerves. More exasperated than anything else.

The other pilgrims soon joined Amunet, many of them visibly stressed out but nobody was panicking anymore. It took a while for the convoy to get moving again however, as they had to fix the damage done by the weapons the slavers had used to disable them in the first place. Not to mention that the large obstructing tree that was used to block the road had to be moved out of the way, which the Power Guard set about to doing with their enhanced strength. Regardless, that would take time. As such, to pass the time, the priests started moving about. Chask and Keme simply went to lead a batch of the pilgrims in prayer, Raisa decided to get into a theological discussion with a few, and Ecla took out her card game once more to calm the more jittery ones down with some simple fun. And soon enough, the armored carriers could get moving again.

The remainder of the journey was not so perilous. Eventually they passed into the region of the planet heavily influenced by Delpolympi, converted to Delvitinaou and thus tolerant of pilgrims passing through their territory, even if they did still keep an eye on them just in case. And in time, they would be able to see the Holy City of Delpolympi itself in the far distance. From a distance, the city was rather massive, with multiple layers of wall, four of them. And it seemed that rather than being by design, those walls were each newly built after the city expanded each time. Notably, as one could see from even this distance, there was quite a bit of overgrowth. Trees were growing atop the walls, standing side by side with the massive anti-air guns, with vines lining the sides of the wall in conjunction with the machine gun nests. The city was very green from all the plant life interwoven with its architecture and even defenses. And yet, none of it seemed to be from neglect, or to damage the structures, rather it all seemed to be melding together in a strange naturalistic fashion. The Convoy continued on its way, heading straight for the main gate of the outer wall.